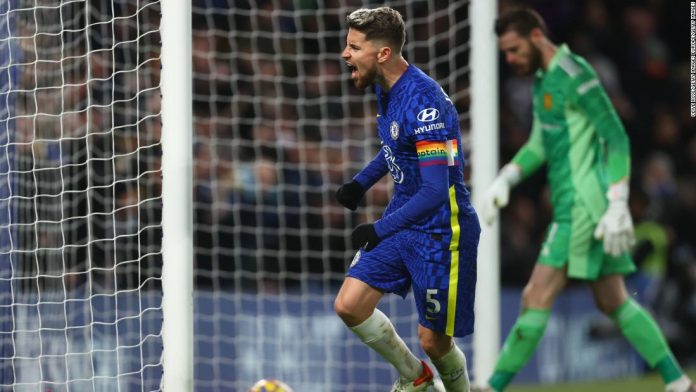 Chelsea dominated the first half, hitting the crossbar and pushing Manchester United goalkeeper David De Gea into many saves. After the break, though, Jadon Sancho capitalised on a weak touch from Jorginho to go through and glide past Edouard Mendy to give United a surprise lead.

Jorginho redeemed himself midway through the second half, coolly tapping home a penalty. Chelsea now has a point more than Manchester City at the top of the standings, while Manchester United goes up to ninth. However, after the game, De Gea stated that “drawing is not enough.”

“We already showed progress against Villareal, as we won, qualified, and now faced a very talented club away from home. The team’s effort was excellent “He revealed this to Sky Sports. “They had the best chance of winning. A draw is insufficient for me. We are in a difficult situation. I am proud of the team’s efforts.

“For virtually the whole game, I felt threatened on the field, in the goal. We defended effectively, they missed major chances, and we capitalised on the one they gave us. It is not enough to draw, but it is a significant point at the time.

“We were allowing three or four goals in our previous games. We’re getting better. It’s only two games. At the very least, we are now defending effectively. We’re battling for every ball. We work as a group.”

Following the firing of Ole Gunnar Solskjaer, Michael Carrick was hired as temporary manager while the club looked for another interim manager to see the season out. Despite speculations that Ralf Rangnick is going to be appointed the next manager, Carrick was in the dugout at Stamford Bridge.

On Thursday, the former Manchester United and England player won his first game as manager, defeating Villarreal in the Champions League. And, before of United’s match against table-topping Chelsea, Carrick made the crucial decision to bench club star Cristiano Ronaldo in favour of a defensively minded lineup. Despite enjoying the majority of possession in the first 45 minutes, Chelsea was unable to break through.

The reigning Champions League champion was utterly dominant, but De Gea was on top of his game, delivering a brilliant save from Callum Hudson-Odoi to deny the hosts. And the breakthrough came five minutes into the second half, but not by Chelsea. As Manchester Unitedcleared a corner, a high clearance was fired into the London sky. Jorginho’s touch just slid away from him, allowing a running Sancho to grab the ball away from him.

That simply left Mendy between him and a crucial goal, and after a small body feint, he passed the ball home in front of the jubilant United fans. After nearly 50 minutes of comfortably being the second-best side, United seemed reenergized, appearing a genuine danger on the break every time its attackers grabbed the ball.

With little over 20 minutes remaining, Chelsea was given a penalty when Aaron Wan-Bissaka kicked the heel of Thiago Silva. Jorginho then redeemed himself by neatly slotting home to level. The goal seemed to sap the offensive enthusiasm of the Manchester United team, even after Ronaldo came off the bench. Chelsea increased the pressure, creating opportunity after chance, but they were unable to break through.

With just two minutes remaining, United was gifted a wonderful opportunity to win the game as Mendy’s clumsy clearance dropped straight to Fred, but the Brazilian’s chip couldn’t clear the thankful Mendy. Chelsea’s Antonio Rudiger had an opportunity to be the game’s hero with the game’s final kick, but he sailed his volley over the bar.

“If he hits the target, it would have been a beautiful ending to a fantastic performance, but we must accept the outcome. We performed admirably, and I am pleased “He revealed this to BBC Sport.

“We were incredibly focused and diligent. I’m pleased with what I observed, and it was a pleasure to coach on the sidelines. We cannot promise results, but by playing in this manner, we may boost our chances of success.”

Tuchel continued, saying: “I am completely satisfied with the performance. We controlled from the start, being aggressive and never stopping attacking. Unfortunately, we managed to score two goals, one for each team.”