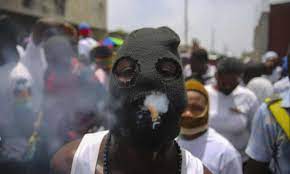 American missionaries were kidnapped by gang members in Haiti. The inquiry is still ongoing, according to the source, and additional information will be available Sunday morning.
After visiting an orphanage in the Croix des Bouquets area, the 17 missionaries drove to Titanyen, north of the capital Port-au-Prince, on Saturday. They were kidnapped on the way between the two locations.
According to the Washington Post, an Ohio-based Christian charity organisation named Christian Aid Ministries verified that the missionaries and family members kidnapped in Haiti are linked with it. According to the article, the organisation and a person familiar with the kidnapping issued a minute-long “prayer alert.”

An armed gang was holding “men, women, and children” linked with the group, according to the “prayer warning” acquired by the tabloid.
According to the report, the minute-long recording indicates that those taken include organisation workers as well as family members who were returning from a site visit to an orphanage in Haiti.
According to the Washington Post, the speaker on the audio remarked, ”
17 American missionaries were kidnapped by gang members. The mission field director and the American embassy are trying to see what can be done.” “Pray that the gang members may repent and put their faith in Jesus Christ.”

According to the Washington Post, one of the abducted missionaries, an American citizen, sent an appeal for help in a WhatsApp group as the kidnapping was taking place, citing a person acquainted with the abduction who spoke on the condition of anonymity.

“Please keep us in your prayers!! They have kidnapped our driver and are holding us prisoner. Pray, pray, and again. We have no idea where they are bringing us “The message stated
It is unclear whether the message transmitted to the WhatsApp group was a video or a text, and there is no information on the WhatsApp group itself in the Washington Post’s reporting.
CNN is unable to independently confirm the validity of this message or report.

The US State Department, according to a spokeswoman, was aware of the reports late Saturday.

“The welfare and safety of US nationals abroad is one of the Department of State’s top objectives. We are aware of these reports but have nothing further to say at this time “a spokeswoman stated

Kidnappings have increased by over 300 percent in Haiti since July of this year.
According to data provided earlier this month by the Center for Analysis and Research in Human Rights, a non-profit located in Port-au-Prince, at least 628 kidnappings have occurred since January, with 29 of them involving foreigners.

According to a UN news release, Haitian Foreign Minister Claude Joseph called on the United Nations Security Council earlier this month to strengthen the mandate of the UN special political mission in his country to help assure security and civilian protection.

“These are the fair expectations of individuals who have suffered enough as a result of gang violence, kidnapping, and rampant criminality,” Joseph explained.

This is a developing story.