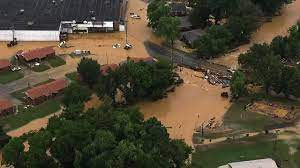 After a record-breaking rainfall, 20 people died in Tennessee flooding.

According to reports, some individuals were stuck in their homes with water up to their necks. Hundreds of homes may be unsafe to live in. Roads, mobile towers, and telephone cables were all damaged by the flooding.

At least 22 people were killed and another 20 were missing Sunday afternoon after flooding caused by record-breaking rains across the state.

According to meteorologists, the hardest-hit areas received twice as much rain as the previous worst-case scenario for flooding in Middle Tennessee.

According to Kansas Klein, a business owner nearby Waverly, the Associated Press reported that a low-income housing complex known as Brookside was extensively destroyed in the storms.

Klein remarked, “It was devastating: Buildings were knocked down, half of them were destroyed.” “People were hauling bodies out of the water who had drowned and died.”

Gov. Bill Lee and U.S. Senators Marsha Blackburn and Bill Hagerty flew into the county by helicopter to assess the damage on Sunday.

Lee exclaimed, “Goodness gracious,” as he witnessed homes being lifted off their foundations and transported into neighbors’ yards on a car excursion.

A state-record 17 inches of rain fell in less than 24 hours in McEwen, Tennessee, 60 miles west of Nashville. Approximately 10 miles west, Waverly received nearly 15 inches of rain, turning the rivers behind homes and through downtown into raging rapids.

According to the National Weather Service, eight to fifteen inches of rain fell throughout Houston, Humphreys, Dickson, and Hickman counties.

On Saturday morning, the area received “approximately 20% -25% of the yearly rainfall amount that this area sees in a year,” according to National Weather Service meteorologist Krissy Hurley.

From a bridge on Saturday morning, Klein watched as homes and cars were washed down a road. Two girls, clutching a puppy and clinging to a wooden board, sped by Klein and other onlookers, who were unable to bring them to safety.

The floodwaters had receded after several hours, but the damage was extensive, according to Klein.