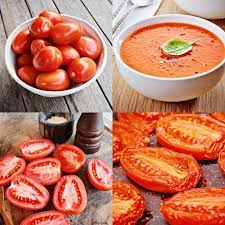 Like many of you reading this, I went through a Tunisian shakshuka phase a few years ago, creating numerous skillets of thick tomato sauce and sunny-side-up eggs.

I adore those runny, sunny yolks—as does Instagram—but I’ve since advanced to recipes in which the eggs and tomatoes aren’t just bedfellows but are mixed together to create creamy, custardy, tangy-sweet results.

Tomatoes and eggs are tasty in any form, inexpensive, plentiful, and simple to prepare. But there’s something about the slightly less photogenic marriage of the two—scrambled, stir-fried, then simmered like sauce—unquestionably that’s relaxing, and possibly more pleasurable.

In the Philippines, a similar sarsiado is layered on top of a whole fried fish, a recipe I learned from chef Miguel Trinidad when we were working on the book I Am a Filipino: And This Is How We Cook a few years ago.

It may go without saying that everything mentioned above is the ultimate comfort food for those who grew up on it, inextricably tied with memories of home.

Grace Young, like many Chinese Americans, mastered the tomato-egg alchemy as a child. “My folks’ dish exemplifies the purity of the stir-fried tomato-egg experience,” she explained. According to Young, they normally make it during this time of year, when fresh tomatoes are at their peak.

Their three-minute stir-fry, which appears in her 2011 book Stir-Frying to the Sky’s Edge, is simple to memorise. Combine four eggs, sesame oil, salt, pepper, and cilantro in a mixing bowl. In a very hot wok, fry some garlic and shallots; add two tomatoes, rice wine, and a pinch of sugar; then scramble in the eggs.
My current favourite wok-cooked variation of tomatoes and eggs is tukhum-bonjan, an Afghan dish introduced to me by Nawida Saidhosin, an instructor at New York City’s League of Kitchens cooking school.
Saidhosin cooks coarsely chopped tomatoes in several inches of ghee in the bottom of her karahi, a flat-bottomed counterpart of the wok used throughout the Indian subcontinent, until tender.

She next adds finely chopped jalapeos and garlic, followed by a half-dozen or more eggs. She gently stirs the whites into a scramble with the tomatoes with a spoon, but she leaves the yolks whole, serving them when they are just just set enough to break into chunks like a soft-boiled egg. Tukhum-bonjan is served on Afghan flatbread with plenty of fresh mint leaves—ideally, you get both in every bite, according to Saidhosin.
Tukhum-bonjan brings back memories of home for Saidhosin, who grew up in Kabul but moved away decades ago to find a more stable place to live. She’s been making it since she was 13, after watching her mother cook it virtually every day, she claims.