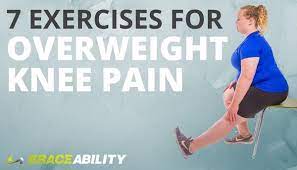 Regardless of the reason of the discomfort, there are lower-body workouts that can develop the hip and glute muscles while putting little strain on the knee joint’s structures. However, if the discomfort persists for more than 10 days, it’s probably time to see your doctor to make sure there isn’t a serious injury. This article discusses four probable causes of knee discomfort and six exercises that may assist to alleviate knee pain.

A traumatic injury, such as breaking one of the ligaments that joins the thigh’s femur bone to the lower leg’s tibia bone, is a typical cause of knee discomfort. The anterior cruciate ligament (ACL) can be injured as a result of a sudden change of direction; if the upper body moves in one direction but the foot does not, the ACL is frequently ruptured as a result. The medial-collateral and lateral-collateral ligaments, which run along the inside and outside of the knee, can also be injured or torn as a result of the lower and upper legs moving in opposite directions.

Injury to a Meniscus

Because joint capsules contain synovial fluid and cartilage, which act as a cushion between the bones, bones do not come into contact with one another. The knee joint has two menisci, one medial and one lateral, which are C-shaped portions of connective tissue that cushion the stresses between the femoral condyles and the top section of the tibia. A subluxation occurs when a joint does not track properly through its intended line of motion; for example, consider a kitchen drawer that sticks and does not work properly. If the knee has a subluxation and the joint does not function properly, it might stress one of the ligaments or compress one of the menisci, causing damage to the tissues and pain.

Another possible source of pain is the knee falling toward the midline of the body while walking or jogging. This could be related to a lack of lateral stability from the hip. The gluteus medius muscle connects the pelvis to the lateral femur. It has fibres on both the anterior and posterior sides of the bone and may perform abduction, which moves the upper leg away from the midline of the body, as well as internal and external rotation.While the gluteus medius has the ability to move the leg away from the body, its major purpose is to provide stability when the body is balanced on a single leg during the mid-stance phase of the gait cycle while walking or running. If the gluteus medius does not do a good job of maintaining the femur, the knee may collapse to the midline of the body, causing a subluxation, stressing the ligaments and menisci, and eventually causing discomfort.

Dorsiflexion is an ankle joint action in which the top of the foot travels closer to the tibia bone (commonly called the shin). Dorsiflexion happens spontaneously during the mid-stance phase of gait as the torso crosses over the foot. If the ankle does not have enough mobility to allow dorsiflexion when the body passes over the foot, it may cause the foot to turn out and the knee to collapse to allow this phase of the gait cycle to occur. In other words, if the ankle lacks sufficient mobility, other joints (such as the knee) will become more flexible to compensate and allow movement such as walking to occur.

If the ankle does not have adequate mobility during squats or lunges, these actions may cause the knee to slide forward. If the knee travels too far forward during the downward phase of a squat or lunge, the thigh’s femur bone may push into the patella bone (kneecap), putting strain on the patellar ligament, which joins the femur to the patella and tibia bones.

The following exercises can help to strengthen the hips and thighs, particularly the glutes, adductors, hamstrings, and quadriceps muscles, which control hip and knee motion. Each exercise is designed to work the hips while permitting just a limited amount of knee motion. In the case of lunges, the fact that the body is moving backward permits the majority of the force of the exercise to move into the glutes, strengthening those muscles, rather than moving into the knees and straining the patellar tendon. These links provide more information about how the hamstrings and adductors work to govern hip and knee motion.

Lie flat on your back with your hands at your sides, palms up and facing the ceiling. Position your feet away from your glutes, toes pointed up toward your shins. Squeeze your glutes while pressing your heels into the floor and lifting your hips to the ceiling. Perform 15-20 reps, 45-second rest, and two to four sets.

Perform hip thrusts by placing a weight over the top of the hips or a mini-band right below the knees to increase the intensity. The weight forces the glutes to work harder, which increases their strength in hip thrusts; this page covers the benefits of the hip thrust exercise. A mini-band placed directly above the knees will draw the knees closer together, requiring the gluteus medius muscles on each leg to work harder to prevent this action.

If it’s difficult to get down on the floor, this is a terrific technique for strengthening the glutes and increasing knee stability. Wrap a mini-band around both of your ankles. To create stability, press your right foot into the floor while pressing your left heel straight back to expand your left hip. Perform 15-20 reps on one leg, then switch to the other; finish two to four sets.

With a Power Band, perform a standing hip thrust.

Connect a stable anchor to a power band. Step inside with the band on the bony points of the pelvic and the anchor point behind you. Place your hands on your head, behind your ears, and maintain your knees slightly bent. Maintain a long spine by pushing your tailbone back and hinge at the hips. Perform 15-20 reps, 45-second rest, and two to four sets. Hold one dumbbell in each hand while performing the hip thrusts to increase the intensity.

Place your feet hip-width apart. Take a step back with your left leg, sinking into your right hip. Lean forward slightly while maintaining a long spine to improve glute activation. Return to the beginning point by straightening your right knee and swinging your left leg forward. Before switching legs, perform 10-12 repetitions on the right side. Rest for 45-60 seconds between sets and repeat two to four times. Hold one dumbbell in each hand while performing the lunges to increase the intensity.

Follow the reverse lunge instructions, except at the top of the action, press your right foot into the floor and squeeze your right glute for 4-5 seconds while balancing on your right leg. Perform 10-12 reps on the right hip before moving to the opposite leg. Rest for 45-60 seconds between sets and repeat two to four times. Hold one dumbbell in each hand while performing the lunges to increase the intensity.

Use a step or a box that is knee height or lower. Place the step or box to the right of your body, place your right foot on top of the box, and step up to the box by pressing down. Balance on your right leg for 4-5 seconds at the top of the step before lowering your left leg to the floor and returning to the beginning position. Perform 10-12 repetitions on the right leg before switching to the opposite leg. Rest for 45-60 seconds between sets and repeat two to four times. Hold one dumbbell in each hand while performing the step-ups to increase the intensity.

It is virtually impossible to pinpoint the exact causes of knee discomfort unless you have had a traumatic injury that has damaged the structures of the knee. Knowing which exercises may assist to minimise discomfort, on the other hand, can ensure that a sore knee does not prevent you from engaging in your favourite activities. The good news is that building strong glute and hip muscles can help to alleviate frequent causes of knee discomfort.