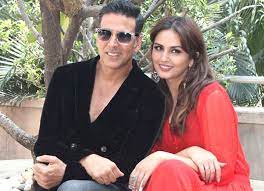 Akshay Kumar’s mother died yesterday. On social media, he announced the terrible news of his mother’s death. “She was the center of my universe. And today, at the center of my being, I am in excruciating pain. My maa, Smt Aruna Bhatia, passed away peacefully this morning and was reunited with my father in the other world. I appreciate your prayers as my family and I go through this difficult time. On Twitter, he remarked, “Om Shanti.”

His colleagues in the industry quickly expressed their sympathies and shared Akshay’s grief. “Dear Akki, I’d want to express my heartfelt condolence Sincere condolences on the loss of your mum. May Arunaji’s soul rest in peace for all eternity. My heartfelt condolences to you and your family. Ajay Devgn commented on Twitter, “Om Shanti.”

Ajay Devgn, Karan Johar, and Huma Qureshi paid a visit to the actor’s home today to show their support during this tough time. Twinkle Khanna and Karan are old acquaintances, and Ajay is known to be close to Akshay. Huma was recently seen in the film Bell Bottom, which also starred Akshay Kumar’s.