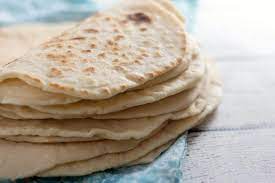 Today is the perfect day to make a flour tortilla. Here in New York City, where I live in the most affluent neighborhood of Brooklyn, my local markets sell almost everything: ajwain seeds and banana ketchup, 20 types of chiles, two types of tamarind, heritage-breed bacon, and even wild oysters, which are becoming increasingly scarce on the East Coast.

What can’t you find in my neighborhood? A really good flour tortilla*, such as those found in supermarkets throughout California, Texas, New Mexico, Nevada, Arizona, and most of Mexico.

A particularly nice flour tortilla, cooked with only flour, water, salt, and lard, can be extremely thin and a bit glossy in parts, depending on the cook or regional preference. It can also be softer and creamier if made with baking powder and possibly milk. Both styles are diametrically opposed to the sticky, waxy mainstream products prepared with guar gum, sugar, and dough conditioners.

When I really wanted a bean and cheese morning taco prepared with a real product in the past, I attempted to create my own flour tortillas. They weren’t quite right—they were difficult to roll, too dense, and far too thick.

When wet flour is heated over 140°F—that is, when the flour is mixed with very hot water—gelatinization occurs: the starches in the flour gel and trap water in the dough even as it cooks. The hot water also prevents the production of gluten and distributes the fat evenly. It’s the method used to make British hot-water pie crusts and Chinese scallion pancakes, both of which have doughs that are easy to stretch and shape but cook up soft and robust.

Boiling water is not uncommon in the preparation of traditional flour tortillas. Freddie Bitsoie, a Navajo chef with an upcoming cookbook who grew up in Arizona and New Mexico, tells me that his mother uses warm tap water, his sister uses boiling water, and he uses a combination of the two.

Flour tortilla recipes, by the way, are like snowflakes in that the fat, water, and flour ratios vary greatly. Some recipes call for liquid frying oil, while others instruct you to use your fingertips to chop in cold lard or shortening. Some request warm water, while others make no mention of water temperature at all.

Sonia Mendez Garcia, a recipe developer who grew up in California and Texas with parents from Monterrey, Mexico, has a lengthy but relatively simple recipe for hot water on her website, La Pina en la Cocia. I was curious as to how hot she was referring to. She told me that after years of tinkering, she now takes the water up to a simmer, around 180oF to 200oF, which works just as well as a boil for gelatinization.

I created Garcia’s recipe with warm tap water (about 100°F), the hottest tap water I could find (approximately 130°F), and water just off the boil (around 200°F) as a test. The dough took longer to come together using the tap water and had some rebound when I flattened it out, so it stayed a little thicker. The tortillas were also a tad chewier.

But what about the nearly boiling water? The dough is soft, pliable, and smooth right away. It rolls out thinly, browns wonderfully on the griddle, and remains soft as it cools. In reality, it feels like a ruse.