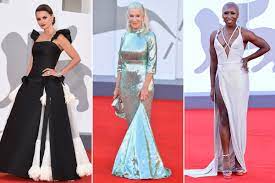 The 2021 Venice Film Festival is likely to be a star-studded celebration, bringing together many of today’s biggest stars and actresses at the city’s iconic Lido.

The 78th edition of the festival runs from September 1 to September 11 and will feature some of the year’s most anticipated films, including the Princess Diana-themed “Spencer,” the sci-fi drama “Dune,” and the psychological horror picture “Last Night in Soho.”

The opening night of the Venice Film Festival took place on Wednesday, with the screening of the Spanish film “Parallel Mothers,” which drew jury president Bong Joon Ho, Cynthia Erivo, Helen Mirren, Penélope Cruz, and others.

On the red carpet on the first night, there were several high-fashion moments, including one from Erivo, one of the festival’s jury members. Erivo appeared in a handmade Versace crystal mesh dress with crystal straps.

Cruz, a Chanel ambassador, donned a black and white dress with bows and feathered elements from the brand’s fall 2021 couture collection, which premiered in July.