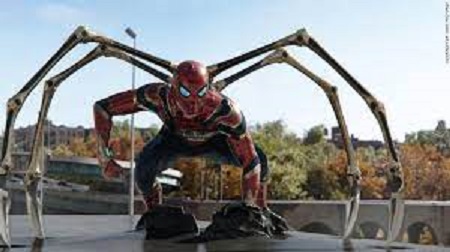 Spider Man saves movie theatres as they swing into the unknown. The same adage applies to movie theatres this weekend, with the arrival of “Spider-Man: No Way Home,” a film demonstrating that it’s still possible to amass a massive opening weekend at the box office, even if such super-powered numbers have become rare, bordering on unheard-of in the midst of the pandemic.

Indeed, the first box-office returns for the third “Spider-Man” film have seemed like a psychological salve for a film industry in turmoil about its future. Dramas and more serious films were already fleeing to streaming, but even popcorn-selling crowd pleasers have faltered as theatres try to rebound.

One blockbuster will not be enough to turn back the clock or scare consumers away from the next Covid type. However, viewing “Spider-Man: No Way Home” early at an industry showing, which is usually a more jaded crowd than an opening-night crowd, brought back some of the special delights associated with seeing movies in a communal setting.

There were whoops, applause, and appreciative laughter at important points – loud in some spots, more subdued in others where the references undoubtedly appealed to a subset of the crowd. After months of attending screenings in sparsely crowded theatres to allow for social distance, the experience seemed like a reminder of how some types of films benefit from being shared.

The crowd reaction wasn’t as loud as in “Avengers: Endgame,” but it did recall a time early in the outbreak when footage leaked of an audience going crazy at the film’s climax sequence.

Last year, the film’s filmmakers, Joe and Anthony Russo, discussed how emotional that scene was, with the latter noting that while the industry was changing, viewing movies with huge crowds “will always be special, in a way that seeing something at home can’t be.”

Despite certain accomplishments throughout the epidemic, there is a growing fear that the film industry may never fully recover to where it was in 2019. However, something like “Spider-Man” conveys a reassuring sensation that the yearning for what cinemas have to give cannot be completely replaced.

When “The Big Bang Theory,” one of the last big network blockbusters, ended its run in 2019, series producer/co-creator Chuck Lorre indicated that individuals writing obituaries for the show were doing so prematurely.

“I’ve been doing this long enough to know when someone says, ‘This is it.’ This will not happen again,’ I have said many times “He told CNN that. “Yes, it does. As a result, humility would imply that making a broad declaration like “this is the end” is usually a bad idea.”
Hollywood can’t turn on a dime, but the outlook for movies in cinemas has grown even more Darwinian, favouring a relatively small number of films that match the criteria to be considered an event. There will be pricey flops for every “Spider-Man” or “The Batman,” and as a result, the gap between theatrical victors and those who must rely on home exhibition – and, in general, narrower budgets – looks likely to widen.

At this point, “Spider- Man’s” triumph appears to be a pleasant spike on a problematic EKG — a short-term shock to the movie industry and die-hard theatregoers, rather than a long-term rescue.

But, for this weekend, as millions throng to the movies, it’s nice to see that the pipes are still operational. In that regard, “Spider-Man” has thrown a lifeline to cinemas, even though their spider sense should be tingling as they swing into the unknown.