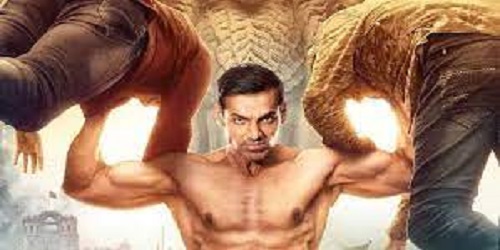 Milap Milan Zaveri, the film’s director and writer, generously filled the picture with every melodramatic cinematic stereotype. Jay snatches a Quran that was thrown in the air and then thrashes the perpetrator in a scenario depicting Hindu-Muslim cooperation. Dadsaheb fights a hundred thugs while giving blood to his wife in the iconic blood-transfusion scene from Amar Akbar Anthony. The karwa chauth song, in which the festival is shown being celebrated by the entire population, the wedding sangeet song, the devar-bhabhi ched chad, the twins covering for each other, and even the famous Mother India sequence — instead of Nargis and her sons, Dadasaheb alone tills the soil and has such strength that he can use the yoke to make a large fissure. In a nutshell, everything that can make you cry has been poured into the mix.

The brothers are shown attacking everyone from crooked politicians to irresponsible physicians to heartless cops to begging gangsters and rapists. The ordinary man’s vision of exacting harsh punishment on the world’s carpetbaggers and crooks has been replayed indefinitely. To make things appear relevant, the video discusses concerns such as a shortage of oxygen in hospitals, the humiliation endured by rape victims, the suffering of young beggars, the corrupt builder-politician nexus, and the woes of debt-ridden farmers. Each of these issues may be resolved by eliminating the most corrupt members in the system. This is the final answer that the film promotes.

There is no subtlety in the film. Each character yells out his or her lines. And no one is speaking normally. Every sentence has a punch line. The background soundtrack is also quite loud and suspenseful.

We don’t know if the people require some sort of escapism illusion. In any event, nothing has been going well for the average guy. Maybe they need a gruesome vengeance fantasy to distract them from COVID-19, unemployment, inflation, and so on. The film’s finest feature is that it promotes social cohesion in a very loud, yelling from the rooftops type of way. And it tells you that if you band together, you will be able to take care of corrupt politicians on your own.

It’s John Abraham’s first triple role, and he’s handled it admirably. In all three of his personas, he never hesitates to deliver the most outrageous lines. It helps that all three are chiselled and have the same height, body structure, and voice. He looked finest in his farmer avatar, in our opinion. He looked good in his rustic attire and handlebar beard. Full credit for his earnestness in dealing with such a wacky material. This film marks Divya Khosla Kumar’s return to Hindi cinema. She has her chance when she orders her husband and brother-in-law to wreak havoc on the rapists. She has a strong screen presence, so let’s see what she does next…

STORY: Satya Azad (John Abraham), an honourable Home Minister, wishes to rid the country of corruption through his Anti-Corruption Bill. However, it does not receive enough ‘Ayes,’ not just from his friends, but also from his wife Vidya (Divya Khosla Kumar), an Opposition member who votes ‘Nay’ in the Vidhan Sabha. When a pair of heinous homicides occur in the city, ACP Jay Azad (John Abraham again) is sent to apprehend the killer, regardless of his reason. So, if you thought this narrative was only about brother against. brother, think again. There’s more to it.

REVIEW: The only way Satyameva Jayate 2 (SMJ2) differs from its predecessor Satyameva Jayate (SMJ) is by addressing corruption and power greed. At the outset, writer-director Milap Zaveri and the film’s crew insisted that it is a mass-market picture in the style of 1980s popular cinema. When you watch John Abraham transform into a vigilante to punish those responsible for the deaths of innocent victims, you’re not as astonished as you are when you realise it’s Satya who is handing out the death punishment and Jay is being enlisted to bring the vigilante to justice.

Milap makes no attempt to hide the fact that he’s paying homage to 80s movies, and his pride in that is abundantly evident in the screenplay and dialogues — be it Satya calling the ACP to tell him that he won’t stop punishing the guilty, Jay’s introductory sequence, or even Dadasaheb Azad (John Abraham yet again, as their farmer father) ploughing a poor farmer’s field, or the brothers wearing saffron All of this and more simply adds to the spice of the narrative.

Apart from the threat of corruption, Milap also covers farmer suicides, violence against women (Nirbhaya in Delhi, Veterinarian in Telangana), the Lokpal Bill, the significance of communal unity, and religious tolerance. The writer-director also makes a pointed observation about today’s media and social media, which is more concerned with recording news and sensationalising it on cameras and cellphones, even when someone is bleeding to death on the streets in broad daylight.

John Abraham appears at ease in this old-school, all-too-often tried-and-true commercial potboiler stuff. He performs all three roles as well, whether as the twin brothers or as the father. If he is restrained as Satya, he is not afraid to play to the gallery as Jay or as Dadasaheb, a humble farmer who leads the campaign for the Lokpal Bill in the assembly.

Divya Khosla Kumar is lovely and has a significant role in this generally male-dominated film. Vidya, the righteous one, does not mince words when she disagrees with and fiercely opposes her husband Satya and her Minister father (Harsh Chhaya) on several matters. Gautami Kapoor plays Dadasaheb’s wife as well as Satya and Jay’s mother. Harsh Chhaya, Annup Sonii, Zakir Hussain, Dayashankar Pandey, and Saahil Vaid all do a good job in their roles.

The music is pleasant to listen to, whether it’s the wedding song Tenu Lehanga or the Karwa-Chauth single Meri Zindagi Hai Tu, and Nora Fatehi shines in the Kusu Kusu number.

The raw hardcore action is the film’s centrepiece, and John does not disappoint, whether he has to lift a motorbike with a rider and toss it, take out an SUV’s engine, or even remove a few metres of dirt by slamming his plough in a field. There are countless seeti-maar moments for action fans to enjoy. While we realise that the picture is a type of tribute to the over-the-top filmmaking of the 1980s that we once enjoyed, some moments, such as three John Abrahams preventing a helicopter from taking off with their bare hands, may be too much for even the most OTT tastes.

If you want massy masala stuff from a bygone age and are willing to take on three times as much John Abraham in one frame, this one is for you.