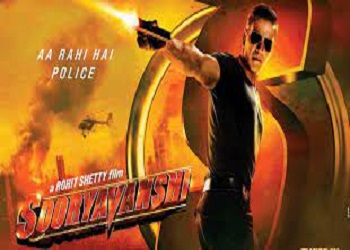 Review film Sooryavanshi. Over the years Rohit Shetty has subtly enlarged his police world, keeping the audience interested and die-hard aficionados of the genre on the edge. After the Singham series (featuring Ajay Devgn) and Simbaa (starring Ranveer Singh), film Sooryavanshi (Akshay Kumar) arrives amid great hoopla, turmoil, and loud theatrics. Sooryavanshi’s character was revealed quietly at the end of Simmba. The film contains all of the components, attitude, flair, showmanship, and heavy-duty star power that one would expect from a Rohit Shetty production.
This cop action saga, like Simmba, is narrated by Ajay Devgn, who reminds us of the various terror attacks that Mumbai has faced since the 1993 serial blasts to the 2008 terror attack on several landmark locations in Mumbai, including The Taj Mahal Palace, Mumbai and Chhatrapati Shivaji Maharaj Terminus (CSMT). The film’s plot unfolds as the city prepares for the largest assault yet, as some Lashkar sleeper cells have been activated and 600 kilogrammes of RDX left over from the ’93 serial bombings are being used for the purpose.

DCP Veer Sooryavanshi arrives with a firm objective and a lot of garam khoon to safeguard the city from another major attack. He is so dedicated to his work that his family, wife Riya (Katrina Kaif) and son Aryan, come second to his great endeavour.

The film’s cross-border narrative focuses around the theme of vengeance, ‘An eye for an eye leaves the world blind.’ While the plot is safe (simple and predictable), the action is daring and thrilling. The pursuit scenario between Veer and John through Bangkok’s streets is a visual treat. Never mind that it appears to be influenced by Carrie-Anne Moss’s bike scene with the keymaker in The Matrix Reloaded.

However, film Sooryavanshi is littered with clichés, and the length, particularly in the first half, might benefit from a solid cut. Following the intermission, it becomes riveting with heavy action and dhamaka.
Akshay Kumar gives an outstanding performance. From his seeti-worthy entrance to the never-ending bullets, he validates his supercop persona. Apart from the high-adrenaline physical clashes, there are several high-drama chases involving cars, scooters, and helicopters, in which Akshay Kumar demonstrates his unrivalled action talents. Overall, it’s an Akshay Kumar show from start to finish, with his star power and screen presence looming huge.

In the second half, Ajay Devgn and Ranvir Singh’s smashing (quite literally) introduction lifts the film and provides a powerful punch. The three performers, who play Bajirao Singham and Sangram Bhalerao, dominate the show in the short sequences they share.

While film Sooryavanshi background score establishes the tone, the songs aren’t very memorable. The reworked version of ‘Najaa’ is an earworm, however it is not featured in the film. The three dancing to Daler Mehndi’s ‘Aila Re Aillaa’ is, nonetheless, fascinating.

Veer Sooryavanshi, Akshay Kumar has skillfully taken on the role from his predecessors (Singham and Simmba), and with a healthy dose of flying and somersaulting automobiles, this one is a great Diwali delight. And if you like high-octane action flicks, you should see this!