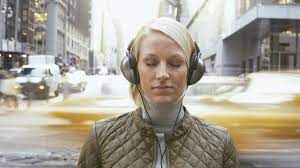 Peoples are at risk of Distraction Danger When they wear headphones

London, UK – May 14, 2019: Peoples are at risk of Distraction Danger, When they wear headphones. According to new data, 37 million Americans believe they have put themselves in risk by wearing headphones or earphones while walking, jogging,, or cycling in the last year. Stepping out onto a road, colliding with some,ne, or failing to notice an emergency vehicle approaching are all examples.

The study, commissioned by Audio Analytic, a renowned AI technology company focused on sound identification, investigated the risks that people in the United States face every day by being distracted from their surroundings while listening to music on the go.

The risk rises with the age of the consumer. More than one in every four young people aged 18 to 34 had put themselves in danger by wearing headphones, with 26% admitting to being in at least one dangerous circumstance in the previous year, and many doing so numerous times.

Despite these disclosures, the majority of people claim to be aware of the dangers of wearing headphones and earphones in public, according to the research. Wearing headphones or earphones while driving is judged unsafe by 96 percent of the population, while other activities deemed risky include cycling (91 percent ), running (86 percent ), and taking public transportation (72 percent ).

According to Dr. Chris Mitchell, CEO, and Founder of Audio Analytic, “an alarming number of people are putting their lives in danger every day by wearing headphones and shutting down their sense of hearing.” Many of us wear headphones to block out the outside world and boost our concentrate, but this comes with the risk of losing awareness of our surroundings. Missing critical information in our environment can eventually expose us to harmful scenarios – and more has to be done to prevent accidents from occurring – and we believe contextually aware AI technology can help with this.”

“Our review of accident data revealed that a warning was issued before the impact in 29 percent of accidents involving pedestrians using headphones,” said Dr. Richard Lichenstein, Professor of Pediatrics at the University of Maryland. Headphones are now worn by a considerable proportion of pedestrians, and noise-cancelling headphones are becoming increasingly popular. If noise-cancelling headphones can now be built to recognise warning sounds and actively alert the wearer to danger, or to automatically adjust sound transmission to raise awareness, there is the potential to reduce injury risk among headphone users.”

The findings reveal a desire for artificial intelligence in headphones, with 88 percent of respondents wanting their audio devices to recognise and alert them to the sound of emergency vehicle sirens. Fire alarms are another crucial sound that consumers want their headphones to detect (92 percent ).
88 percent of Americans believed that dynamic noise cancellation, in which headphones save battery life by automatically turning noise cancellation on when needed, would be useful in a variety of settings, including the home, commuting,, and working out at the gym. 58 percent of respondents said they would buy wearables with dynamic sound equalisation, which allows the wearables to adjust the audio experience for diverse acoustic conditions.

“Modern headphones with active noise cancellation can enhance the risk of distracting danger, but these devices also offer a solution,” Dr. Chris Mitchell stated. When the earbuds themselves can hear and recognise crucial sounds, such as a siren, automobile horn, or even a doorbell or someone conversing, the devices can immediately inform the wearer or modify settings to allow more sound through to improve awareness. Wearables using sound recognition could improve sound quality and better manage battery power in the world around us. Advanced AI technology has the potential to make the next headphones we buy intelligent enough to grasp the context.