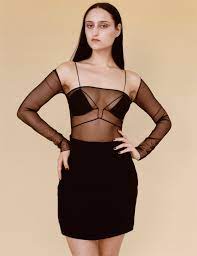 Nensi Dojaka has already become a favourite of many celebrities in the last year, and her recent honor is anticipated to boost her fame even further.

Nensi Dojaka, who lives in London, is a Central Saint Martins graduate who founded her own line in 2017. The university awarded her bachelor’s and master’s degrees. During her schooling, she worked as an intern for designer labels including Peter Pilotto and Fyodor Golan.

Nensi Dojaka designed a capsule collection with Ssense two years after displaying her graduate collection and was chosen to show as part of the Fashion East emerging designer assistance platform.

She was also chosen for the inaugural edition of the mentorship program founded last fall by fashion designer Alessandro Dell’Acqua and Tomorrow London, which assisted her in obtaining 30 points of sale around the world.

The designer is well-known for her lingerie-inspired gowns and cutaway pieces that harken back to the 1990s. For her looks, she draws inspiration from Helmut Lang and Ann Demeulemeester. Several famous celebrities have worn her designs in the recent year, including Emily Ratajkowski, Sophie Turner, Emma Corrin, Carey Mulligan, and Bella Hadid, who wore a dress from Dojaka’s autumn 2020 collection at last year’s MTV Video Music Awards.

Dojaka was chosen from among over 1,900 candidates from 110 countries for the competition, which includes a grant of 300,000 euros and a year of mentorship from LVMH Mot Hennessy Louis Vuitton experts. The prize money will be used by the designer to grow her team and focus on production. She recently began working with a new business in Italy and is utilizing more environmentally friendly fabrics.

The designer will give her first fashion presentation on September 17 during the forthcoming London Fashion Week.