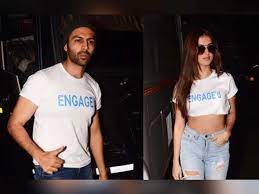 Kartik Aaryan is back on set for his two upcoming projects.

Kartik Aaryan is back on set as he begins work on two of his upcoming projects, one of which is Bhool Bhulaiyya-2 with Kiara Advani and Tabu, and the other is Freddy with Alaya as his co-star. Alaya, who was only cast in the film a few days ago, is already on set filming. However, according to reports, she was not the producers’ first choice.

According to a source, the producers wanted a new pairing for the thriller and approached Tara about it. In the beginning, the team only needed her for a few days. But she had to decline the same.” The source went on to explain why Tara had to say no, saying, “Sajid Nadiadwala, who produced Tadap and Heropanti 2 with Tara, intends to cast her in another film. In fact, she is currently filming Ek Villain 2 with Arjun Kapoor for a few days. When she was offered Freddy, her dates clashed with a few days of Heropanti 2 filming, and Sajid refused to let her go because it would jeopardize his project. She eventually had to say no to the Freddy creators.”