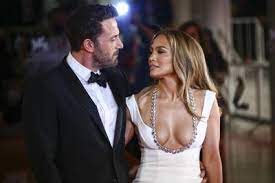 On the second to last day of the Venice Film Festival, the couple arrived on the red carpet for Affleck’s latest film, “The Last Duel,” for which he also penned the screenplay. Matt Damon, Adam Driver, and Jodie Comer co-star alongside him.

The historical drama, directed by Ridley Scott and adapted from Eric Jager’s book of the same name, is set in 14th-century France and follows the story of a woman who has been raped by her husband’s best friend. Her husband then challenges a friend and a squire to a combat trial, which ends up being the country’s last legally sanctioned duel.

Lopez wore a Georges Hobeika Couture dress from the autumn 2021 collection, styled by Rob Zangardi and Mariel Haenn, and accessorised with a Cartier diamond bracelet, earrings, and ring, as well as metallic silver Jimmy Choo platform heels. Affleck looked dapper in a black tuxedo with a bowtie.

This is the couple’s first red carpet appearance since rekindling their romance in April, soon after Lopez called off her engagement to former MLB star Alex Rodriguez.

From 2002 until 2004, the two were one of the most talked-about couples of the early 1990s, with tabloids referring to them as “Bennifer.” They were engaged in 2002 and planned to marry in September 2003, but the wedding was postponed owing to widespread media coverage. The couple called off their engagement in January 2004.

Lopez and Rodriguez began dating in 2017 and were engaged in 2019, while their wedding was twice postponed due to COVID-19. In March 2021, rumours surfaced that the couple had called off their engagement, prompting the couple to issue a statement stating that they were working through their issues. They eventually separated up in April.

Aside from her triumphs in the entertainment industry, Lopez has also developed JLo Beauty, a successful beauty line, and is a Coach brand ambassador. She sang during President Joe Biden’s inauguration in January, wearing a Chanel ensemble that was crisp and all-white.