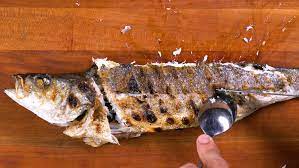 Grab That Whole Fish by the Tail. One of the most renowned recipes from Alice B. Toklas’ 1954 cookbook depicts an entire striped bass cooked for Pablo Picasso. Toklas poached the fish in a peppery broth before transferring it to a dish and garnishing it with piped mayonnaise and tomato paste stripes, truffles, and sieved eggs.

When I first heard this description in my early twenties, it struck me as the kind of grandiose, unattainable amusing gesture that would necessitate incredible seafood prowess, not to mention a much nicer fish counter than the one at the Stop & Shop within walking distance of my apartment. Cooking a whole fish as the centerpiece of a meal does not appear to be feasible in 2021.

Carla Lalli Music’s new cookbook, That Sounds So Good, guides readers through a “Not-Scary Grilled Whole Fish.” Cravings: Chrissy Teigen’s new book, All Together, includes a recipe for a whole branzino sprinkled with the primary flavour components of Thai tom yum soup and roasted over a bed of Japanese eggplant. Cooking at Home by David Chang and Priya Krishna includes a simple method for cooking a whole fish in a steamer basket packed with aromatics. In Tasty Over the Top, the newest volume in the Tasty series, a whole snapper is stuffed with citrus segments, roasted, and served on a bed of homemade chile crisp.

“Cooking a whole fish is certainly nothing new—humans all around the world have been doing it for aeons,” says Tasty recipe developer Casey Elsass, who added the dish to the book. “However, in the United States, it is all too tempting to rely on convenience, especially when it comes to the meat that has been deboned, skinned, and neatly portioned. So presenting a whole fish at the dinner table is exceptionally joyful, extravagant, and perhaps a touch daring.”

While there are many regions in the United States where high-quality fish is difficult to find or excessively expensive, convenience has risen to the top of the priority list as online retailers such as Fulton Fish Market, Sea to Table, and FreshDirect has expanded their operations. When restaurants began to close temporarily in early 2020, restaurant suppliers such as Pierless Fish and Baldor shifted to home deliveries, providing home cooks access to the same supplies that their favourite restaurants had been using.

Chef Josh Niland, author of The Whole Fish Cookbook and Take One Fish, says he’s witnessed a significant improvement in the quality of fish accessible to Australian home cooks, which he blames in part to decreased demand caused by restaurant closures. However, he observes that consumers, in general, are becoming increasingly interested in the provenance of the fish they purchase, which is beginning to influence what is available. “For fishermen, improved procedures for catching, killing, and transporting fish are resulting in a lot better product with a longer shelf life than in the past. This means that the client receives a better product and the fisherman receives a higher financial return,” he explains.

In Foodheim, a new cookbook by comedian Eric Wareheim and TASTE contributor Emily Timberlake, Wareheim describes a technique for grilling an entire fish wrapped in fig leaves on a grill. It’s a tactic he learned during the pandemic when chef Chris Kronner began delivering restaurant-quality fish in the Los Angeles area.

Maggie Hoffman, Epicurious’ digital director, tells me that preparing a whole fish has recently become more interesting to her. “It was partly a craving for that dramatic restaurant-style presentation at home during the pandemic, but then you get the hang of it and realise it’s such an easy method to create impressive flavour,” she adds. “If you buy decent fish, there’s no reason you can’t cook one that’s just as good as what you’d get in a restaurant.”

Gregory Gourdet, a Portland chef and restaurateur, is a big fan of cooking fish whole, and his debut cookbook, Everyone’s Table, which came out earlier this year, has three recipes for it. “I definitely think some people are intimidated by preparing a whole fish,” he says, “but many civilizations all over the world survive on whole fish cookery as an everyday staple.”

Whole fish, as Gourdet points out, is less expensive per pound than pre-butchered portions. You also get to maximize the surface area of crispy skin while reducing the little portions of soft meat around the collar and tail that would otherwise go to waste. In addition, by packing the cavity with citrus and herbs and applying seasoning on the skin, you may flavour the fish from the inside out.

“Also, cooking food with its own bones tastes better,” argues Francis Lam, editor in chief of Clarkson Potter. “I’m not sure if that’s true, but that’s something I’ve been told my entire cooking career, so I simply take it as gospel.”

Niland agrees with Lam: “There are obvious advantages to cooking a whole fish over a fillet.” Moisture and size retention are improved. There is also little labour involved in baking and eating a whole fish, and it has the potential to carry a variety of flavours in the cooking.” Take One Fish, his latest book, including recipes for salt-and-vinegar grilled coral trout and snapper cooked in salt pastry designed to appear like fish scales. Niland suggests the salt pastry way for first-time whole fish cooks as an easy approach with a great payout.

“The reason I adore roasting a whole fish—and why we should all do it more often—is that it’s nearly impossible to mess it up,” Elsass explains. “Fish has a naturally fatty skin and a gelatin-rich skeletal structure, which translates to ‘insane flavour and impossibly moist.’ Even if you go a few minutes too long, you can be sure that bite after flawlessly flaky bite is still waiting for you inside.”