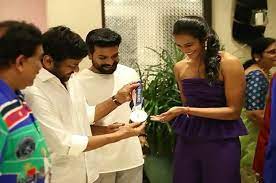 PV Sindhu, the Olympic champion in badminton, brought pride to our country all over again when she earned her second medal in the Tokyo 2020 Olympic Games. Chiranjeevi and Ram Charan, the superstar father-son duo, did not leave any stone un-turned in recognizing her efforts and the major triumph.

They threw a party at PV Sindhu’s house to celebrate her success. Sindhu’s victory and accomplishments were celebrated by the industry’s who’s who. Ram Charan even posted a video of the occurrence to his social media accounts.

Chiranjeevi and Ram Charan can be seen proudly posing for photos with Sindhu. Chiranjeevi presented her with a shawl and replaced the medal around her neck.