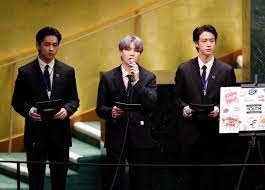 BTS Looks to Sustainable Fashion for Appearance at U.N. Headquarters. BTS, the world’s most popular K-pop boy band, returned to the United Nations on Monday to accompany President Moon Jae-in of South Korea ahead of the start of the 76th annual General Assembly, three years after making a stir at the UN Headquarters in New York City.

The president named the seven-member group, which includes RM, Jungkook, Jimin, Jin, Suga, J-Hope,, and V, as the United Nations’ Special Presidential Envoys for Future Generations and Culture for the Republic of Korea, to assist promote the COVID-19 vaccination.

RE; CODE, a sustainable label based in Korea, created unique suits for each member of BTS.

On its official Instagram account, the business stated, “This suit design strives to support sustainable fashion and it is specifically developed for BTS’ address at the United Nations.”

The group, who claimed to be fully vaccinated against COVID-19, spoke for seven minutes, emphasising the necessity of getting the vaccine and praising young people all around the world for their resiliency throughout the epidemic, claiming that they are not a “lost generation” as a result.