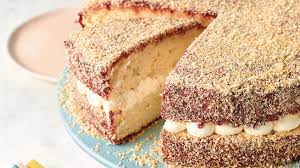 Many people recognize her as the star contestant from the 2015 season of the Great British Bake Off, who triumphed in [redacted] place (I won’t give anything away if you haven’t watched it), or as the baker who made international headlines in 2016 when she prepared the queen’s 90th birthday cake. In addition to these credentials, Nadiya Hussain has a knack for making baking look effortless and enjoyable.

Hussain adds a sophisticated sense of humour into British and Scottish dessert classics in her latest book, Nadiya Bakes. Scotch eggs are reinvented as a lemon-flecked, creamy treat. Lamingtons are reimagined as a large, regal layer cake. And cranachan, a Scottish berry trifle, is transformed into a mango, cream, and butter-toasted cornflakes layered parfait. It’s a sense of ingenuity that makes you want to get in the kitchen and re-create some of your favourite childhood sweets.

Hussain told me why she wanted to explore some of these classic recipes, why she loves frozen puff pastry, and how the queen’s birthday invitation included a strict “no fruitcake” prohibition.

Have you seen any significant variations in the way Americans and Brits think about baking since you began producing books in the United States and your shows began broadcasting here?

There are a lot of characteristics that distinguish us, but because of the pandemic, I haven’t been able to communicate with my American audience as much as I would have liked. After visiting America, I believe there is a willingness to try new things. What the UK and the US have in common is an innate and profound love for baking, which has undoubtedly grown since the pandemic. Baking has become a global language in the UK and the US as more of us stay at home.

The Scotch Crème Eggs concept blew me away. Have you tried it with other egg-shaped candies or different coating combinations? How did you come up with the book’s combination?
It’s just the way my mind works—if we can have something savoury, why not something sweet? Often, that is sufficient as a starting point for developing something fresh and exciting. You may use any round truffle, such as a Lindt ball or a Ferrero Rocher, and you can change up the coating by using cereal or cookie crumbs—try it out and see what you come up with.

Similarly, the mango and cornflake cranachan, a traditional Scottish delicacy, was delicious. What led you to cranachan as a riffing template, and why did you think it needed to be updated?
Because I’m not a purist, I enjoy experimenting with traditional recipes. That said, it’s not because they need to be changed; I simply love experimenting with other flavours and utilizing the original recipe as a springboard.

In the book, there are numerous imaginative uses for frozen puff pastry (like in the chicken, brie, and cranberry pithivier and the Portuguese custard tarts). What is it about readymade puff pastry that you find so appealing? What else should consumers bear in mind while purchasing puff pastry?
I adore puff pastry that has already been prepared. It’s a labour of love for me when I make it from scratch, and it’s a skill I’m glad I have. However, I enjoy the ease of purchasing pastry. It’s frozen and can be kept in the fridge or freezer until you’re ready to use it. When purchasing it, I would suggest purchasing a good-quality pastry as well as some ready-rolled pastry, which is a step closer to convenience.

You got to make the queen’s birthday cake a few years ago. Were there any cake parameters or suggestions for the queen’s favored tastes given to you prior to the celebration?
When it came to the cake, I basically had no guidelines in terms of size or flavor. All I was asked was to make sure it wasn’t a fruitcake, which may be dense and difficult for the queen to cut through. Finally, I settled on a three-tiered orange drizzle.

Baking competition shows, understandably, put contestants under a lot of pressure. Are there any recipes from the Great British Bake Off that you’d never make again because they made you so nervous?
There was a soufflé recipe that I said I’d never make again, but I’ve made it several times since then. So clearly nothing will stop me from baking! Not even the most arduous baking competition.

This interview has been edited and condensed for clarity.