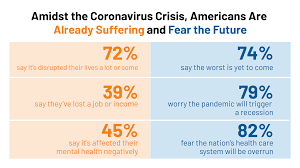 Americans believe the worst of the pandemic is yet to come. COVID-19 updates

According to a Pew Research Center research released Wednesday, more than a year and a half after the COVID-19 pandemic began, most Americans feel the coronavirus is still a big threat to public health and the economy.

Despite widespread vaccination efforts, 54 percent of individuals in the United States believe the outbreak worst is yet to come.

A fifth of adults reports they have never been vaccinated. Those without health insurance and white evangelical Protestants (57 percent each), as well as Republicans and Republican leaners, have among of the lowest immunisation rates (60 percent ).

Black adults are now roughly as likely as white adults to report having received a vaccine (70 percent and 72 percent, ). African Americans were less likely to say they planned to get a COVID-19 vaccine earlier in the outbreak.

More than three months after state officials stopped publicly reporting the information, 19 deaths in Florida counties quietly resurfaced this week on a federal website tracking the pandemic. The new data was released one week after a USA TODAY Network-Florida report on the scarcity of county death data.

Missouri’s new health czar, Donald Kauerauf, said it was critical to retooling the state’s vaccine message, to get 80 percent of the state’s residents vaccinated. According to state data, approximately 52.8 percent have received at least one dose.

A judge in Minnesota has denied a request by concerned parents to impose a statewide mask mandate in all schools. Ramsey County District Judge Thomas Gilligan stated that while the court was “gravely concerned” about the virus, it lacked the legal authority to order Gov. Tim Walz to issue the directive.

Jim Breuer, a “Saturday Night Live” alum, has stated on his Facebook page that he will not perform at venues that require proof of vaccination. Breuer says he won’t go to two upcoming stand-up shows “because of the segregation of them forcing people to show up with vaccinations, to prove you’re vaccinated.”

According to Johns Hopkins University data, the United States has recorded over 41.4 million confirmed COVID-19 cases and over 665,800 deaths. Totals worldwide: over 226.1 million cases and 4.65 million deaths. According to the Centers for Disease Control and Prevention, nearly 179 million Americans — or 54% of the population — have received full vaccinations.

The new national initiative begins on October 7, with proof of at least one vaccine dose required. According to the county’s Department of Public Health, proof of full vaccination will be required by November 4. Indoor restaurants should take the same precautions, but health officials have chosen not to require proof of vaccination.

The new restrictions come just in time for the holiday season, which brought a massive influx to Los Angeles last year.

The FDA has released the first analysis of Pfizer’s booster shot application.

The US Food and Drug Administration released its first analysis of Pfizer’s application for booster shot authorization two days before a CDC advisory committee meeting to discuss the safety and effectiveness of COVID-19 booster shots.

Officials examined the company’s data on over 300 adults who received a booster dose six months after their initial vaccination and discovered that they had a stronger immune response. Simultaneously, officials stated that “data indicate that currently US-licensed or authorized COVID-19 vaccines continue to protect against severe COVID-19 disease and death in the United States.”

The report comes after an expert review by international scientists discovered that vaccines continue to be highly effective against severe disease, including the delta variant and other major variants. The worth and ethics of giving third “booster” shots to healthy Americans while many countries are unable to obtain enough vaccine for first and second jabs.

Dr. Anthony Fauci told MSNBC on Tuesday that booster shots are an important part of the effort to halt the coronavirus outbreak because immunity is waning across all age groups. He stated that the government is working to provide vaccines for the United States and the rest of the world, and he reiterated his call for all Americans to get vaccinated, even if they are young and healthy.