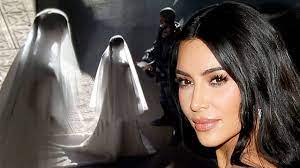 According to multiple outlets, Kardashian West joined the rapper at Chicago’s Soldier Field on Thursday night, where he hosted his latest listening event for his new album. The occasion was live-streamed, and viewers watched Kardashian West dressed in what seemed to be a Balenciaga autumn 2021 couture bridal gown with a long veil hiding her face.

The sartorial choice, while interesting given the couple’s current divorce procedures, is not entirely coincidental given that West recruited Balenciaga designer Demna Gvasalia as creative director for his “Donda” release events. West has already donned pieces from the designer’s Balenciaga collections during his other “Donda” listening parties, including a studded black jacket from the fall 2020 collection.

Kardashian West, who has previously attended West’s “Donda” listening events with their four children, has not posted anything from yesterday night’s event, but her sisters Khloé Kardashian and Kylie Jenner have posted many Instagram Stories of the broadcast.

After nearly seven years of marriage, Kardashian West filed for divorce from West in February, according to reports. North, Saint, Chicago, and Psalm are the couple’s four children.

West’s Chicago listening party was also met with some criticism since he invited rapper DaBaby and musician Marilyn Manson as guests. Both musicians have been under criticism in recent months, with Manson facing sexual assault allegations from multiple women and DaBaby coming under fire for homophobic remarks he made during a performance.

West had two more “Donda” listening parties this summer, both at Atlanta’s Mercedes-Benz Stadium, where he was rumoured to be living while finishing the album. West’s tenth studio album, “Donda,” is titled after his late mother, who died in 2007.