Home World News A rape occurred on a train in Philadelphia while witnesses held up...
Facebook
Twitter
Telegram
WhatsApp 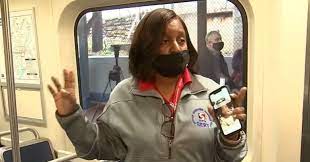 A rape occurred on a train

According to police, a man was charged with raping a lady on a train outside of Philadelphia while fellow passengers stood by, held up phones, and did nothing to intervene.
According to investigators, the man, Fiston Ngoy, 35, harassed the victim, grabbed her, and eventually raped her as fellow passengers observed the crime over more than two dozen train stops. Police believe no one phoned 911, but they are looking into if any of the witnesses videotaped the incident.
Southeastern Pennsylvania Transportation Authority cops stopped Ngoy at a train station after discovering him in the midst of his assault, according to SEPTA Police Chief Thomas J. Nestel at a press conference.

“When the doors opened, a cop entered and observed what he thought was a criminal act taking place,” Nestel explained. “He yanked him off her and dragged him out onto the platform.”

Nestel stated that both Ngoy and the victim boarded the train at the same station, the Frankford Transportation Center in northeast Philadelphia. Police claim they weren’t able to stop the assault until the train arrived at the 69th Street terminus on the Market-Frankford Line in west Philadelphia, roughly 27 stops later. Nestel stated that his police responded within three minutes of receiving the lone 911 call – from an off-duty transportation employee.

Police and other officials were concerned that no one observing the assault responded and convened a news conference to reiterate the importance of reporting anything strange immediately, even anonymously or through the emergency buttons on trains.

“What we want is for everyone to be upset and disgusted, and to be determined to make the system safer,” Nestel said, adding that it “concerns me” that no one intervened throughout the lengthy assault, which an arrest affidavit states lasted around 40 minutes.
He pointed out that surveillance video showed the incident and appeared to show other passengers perhaps filming it. “There were people with phones in their hands seeing the act,” Nestel added. “People were pointing their phones in the direction of the woman who was being assaulted.”
Elizabeth Jeglic, a psychology professor at John Jay College of Criminal Justice, studies the prevention of sexual violence. She explained that if individuals are hesitant to intervene physically, they have other options, such as calling the police.
“When we have a large group of individuals, people don’t always intervene,” she explained. “However, more recent study indicates that when we look at video footage of more extreme instances, we see people intervening in up to 90% of the cases. So it was an anomaly in this circumstance that no one stepped up to assist this man.”

According to arrest documents, Fiston Ngoy, 35, is facing a slew of crimes, including rape. The arrest affidavit for Ngoy outlined the periods of the assault, including the fact that the woman appeared to continuously push Ngoy away over those 40 minutes.
Nestel refused to provide an estimate of the number of witnesses, and the affidavit did not specify how many passengers were present during the 40-minute period, but the train line is the busiest on SEPTA.
The surveillance video has not been made public by the authorities.

According to the affidavit, Ngoy sat down next to the woman approximately a minute after boarding the train car, shortly after 9:15 p.m. The footage shows her repeatedly pulling him away until he is seen ripping her pants down around 9:52 p.m.

Officers arrived at 10 p.m., according to Superintendent Timothy Bernhardt of the Upper Darby Police Department, which is investigating the incident.

Ngoy was apprehended after being dragged away from the woman. The sufferer was sent to a nearby hospital. According to court documents, the woman told police that Ngoy refused to leave despite her repeated requests. According to the arrest document, Ngoy claimed he knew the woman and that the encounter was consensual, but he couldn’t recall her name. His last known residence was a homeless shelter.

SEPTA described the event as a “horrendous criminal crime” in a statement.

“There were other people on the train who observed this awful conduct, and it may have been stopped sooner if a rider phoned 911,” SEPTA said in a statement, urging people to call authorities if they spot a crime or anything out of the ordinary.