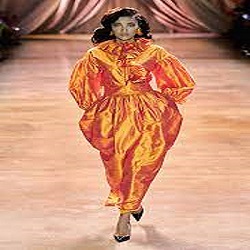 Christopher John Rogers should be congratulated for winning the prestigious American Womenswear Designer of the Year award at the 2021 CFDA Fashion Awards on Wednesday.

In the category, he beat over Catherine Holstein for Khaite, Gabriela Hearst, Marc Jacobs, and Peter Do.

Though Rogers has only published a few collections since launching his business in 2016, his eye-catching patterns and brilliantly coloured designs have been spotted on the likes of Michelle Obama, Rihanna, Zendaya, Beyoncé, Lady Gaga, and Vice President Kamala Harris.

This year, the designer got off to a great start when Harris wore a now-iconic purple coat and dress from his label to Joe Biden’s presidential inauguration in January. Since then, his pieces have been seen on Miley Cyrus, Tracee Ellis Ross, Regina King, and Michaela Coel, among others, and he has continued to outfit household celebrity names.

His outfit was also included in an episode of the highly anticipated “Gossip Girl” remake on HBO Max when Julien Calloway, portrayed by Jordan Alexander, finished his fashion presentation.

Christopher John Rogers, who was born in Baton Rouge, Louisiana, and graduated from the Savannah College of Art and Design, was named the 2019 CFDA/Vogue Fashion Fund recipient. In the year 2020.

Bridget Foley described Rogers’ spring 2021 ready-to-wear collection as “fun and showy — yes, but with an undercurrent of power dressing.” “These clothing express a very unique feeling of excitement, fueled by power and self-assurance, given their brilliant, sharp daring.” They herald the arrival of a lady who is a force to be reckoned with, who wears her optimism with purpose.”